If you are looking for a destination that’s full to the brim with sporting attractions, look no further than Merseyside. It’s home to one of the most celebrated racecourses on the planet, the 5 time champions and 12 of the finest golf courses in Britain. Sheesh!

So, if you’re visiting the city, here are 8 sporting attractions you must visit in Merseyside. 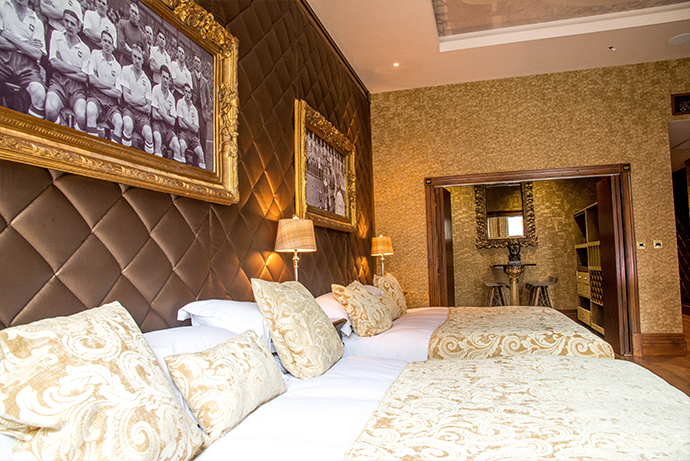 The Shankly Hotel is the perfect destination for all football fans – but we’re bound to say that, right? Well, you be the judge. Our luxurious hotel has been inspired by one of the world’s greatest football managers: Bill Shankly – with each area of the hotel telling stories of his life.

Whether you are a fan of Liverpool FC or simply want to experience what it’s like to step inside an English Premier League football club, you should head on over to Anfield Stadium. You can take a tour of the stadium, allowing you to touch the famous “This is Anfield” sign. A friendly tour guide will provide a variety of informative facts and stories about the club, and you’ll even have the chance to visit the Upper Centenary Stand for impressive views of the stadium.

Everton FC were the city’s first football club, and is supported by some of the most loyal fans in the country. Just one mile from its former home, Anfield Stadium, you can take a behind-the-scenes tour of Goodison Park. Find out what it could be like to walk down the tunnel to 40,000 fans, and take a look inside the very changing rooms where the players dress and relax before a big football game.

Not only is Merseyside home to the longest nine-hole golf course in the country, but it is also the home to 12 of the best golf courses in Liverpool. You can visit the three Royal Links golf courses, or even the Royal Birkdale in Southport – which has been voted the number one golf course in Britain. So, if you’re an avid golfer, or just want to experience a stunning golf course, Merseyside is a must-visit!

On top of providing some of the biggest and best concerts and shows in the world, the Liverpool Echo Arena also hosts a variety of sporting events, including regular boxing matches. The Echo Arena has also played host to the Davis Cup, the British Gymnastics Championship Series, Bodybuilding events and the Liverpool International Horse Show.

On the opposite side of the water from Anfield Stadium and Goodison Park, you’ll find Prenton Park – the home of Tranmere Rovers. When in the city, why not buy tickets for a big game, surrounded by the club’s loyal fans who love nothing more than cheering the Super White Army onto victory.

If you want to enjoy a little bit of sporting activity yourself, we recommend the Liverpool Watersports Centre, as you can enjoy a spot of sailing or canoeing. Just a five minute stroll from the Pier Head and Albert Dock, you could soon be enjoying some fantastic water sports in the heart of Liverpool.