At the Shankly Hotel in Liverpool we were delighted to play host to inspiring couple Katie and Sam, who stayed with us over the Merseyside Derby weekend.

When tragedy struck in January 2016, Katie was left with a long recovery journey ahead. However, the unfortunate twist of fate didn’t hold Katie back; after making an inspiring recovery, we wanted to lend a small helping hand on behalf of Bill Shankly himself.

In January 2016, Katie was making her way to work when she found herself faced with treacherous black ice. When her car skidded along the ice and tragically hit a tree, the accident caused significant injuries.

Thankfully, Katie’s local air ambulance team were able to airlift her to the major trauma unit in Plymouth, where she was admitted to the Intensive Care Unit with a severe head injury.

3 weeks after being moved to a ward, Katie suffered a further setback; she required emergency surgery to her abdomen, meaning an extra three weeks on the Intensive Care Unit.

As time passed, Katie was transferred to a neuro rehabilitation unit where she was faced with the harrowing task to learn to walk, talk and regain her independence. After a turbulent time away from home, Katie was finally discharged home on the 28th April 2016. 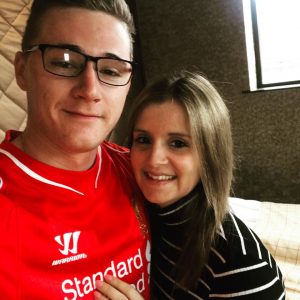 The brave Primary Education student was completing the third year of her degree when the accident struck. Defying the odds, Katie has been able to return to studying, amazingly picking up her degree where she had left off.

Prior to the accident, Katie had bought tickets to take her boyfriend to watch the Liverpool v Sunderland match in February for his birthday.

A passionate LFC fan, Sam had never been to a home match before and the couple were devastated when their plans fell through. Katie and Sam were unable to attend the match as Katie had been readmitted to Intensive Care that weekend.

When Katie’s friend got in touch with Shankly Hotel Director and Bill’s Grandson Chris, to share her story, Liverpool Football Club stepped in to offer two tickets for Katie and Sam to attend the Merseyside Derby.

As the couple were in search of accommodation, we were delighted to welcome them to stay at the Shankly for two nights to top off their weekend with an extra touch.

We’re so pleased that Katie and Sam had an enjoyable stay with us at the Shankly Hotel. Bill Shankly was a man of the people and we always aim to celebrate his character and outstanding morals.

We would love to see Katie and Sam again soon and wish Katie the best of luck with her surgery coming up in May!