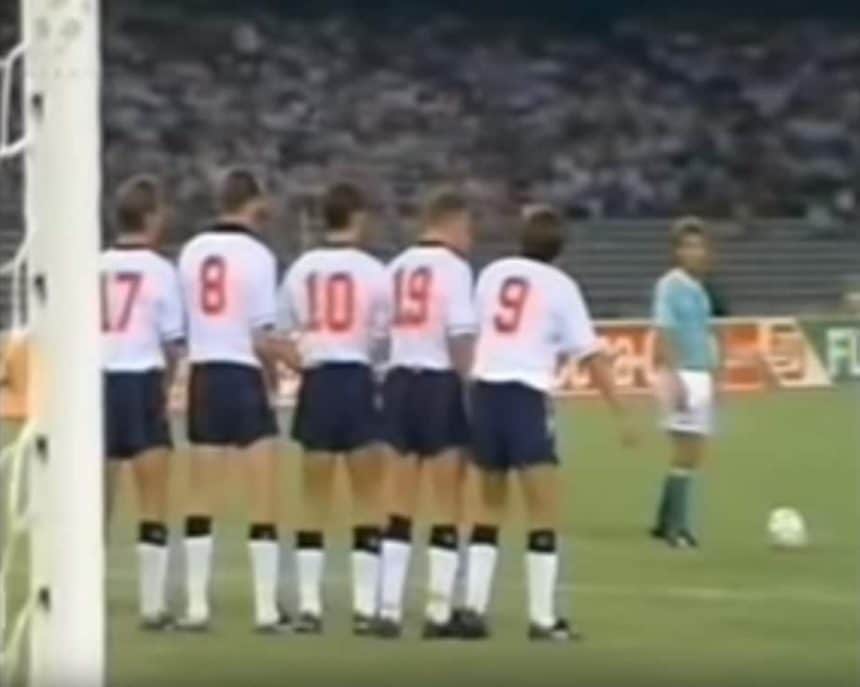 Though choruses of ‘It’s Coming Home’ may have started with a hint of British sarcasm, the greatest plot twist of the World Cup 2018 is that football could actually be coming home.

With waistcoat sales soaring thanks to Gareth Southgate and the sunny backdrop of Britain’s heatwave keeping beer gardens busy, World Cup fever has been spreading thick and fast.

It’s been a competition to remember so far, and it’s safe to say that we’re clinging on to high hopes for the England vs Croatia semi-final.

To celebrate England’s success, we thought we’d take a step back in time to the last time England made it to the semi-final of the World Cup.

So, it’s back to 1990 we go. The World Cup semi-final of the new decade saw England take to the pitch against West Germany. It’s been 28 years since the game, and football fans who remember the highly anticipated match have been reminiscing on the atmosphere and moments that stood out most.

At the time, England were managed by Sir Bobby Robson. The team had played impressively throughout the competition, finally knocked out of the game by West Germany on penalties.

In Gazza Misses the Final, a collection of minute-by-minute reports written by Rob Smyth and Scott Murray, the classic World Cup match of 1990 is documented as it played out.

“England were the better side in normal time and West Germany in extra time. The Germans will go on to their third consecutive final, hoping to avenge their defeats in 1982 and 1986. England go into a third-place play-off with Italy on Saturday after a night of raw emotion and proud heartbreak that will live with us all for ever. Gazza has tears streaming down his reddened face as he salutes the England fans. Time to listen to ‘World in Motion’ on loop while drowning a million sweet sorrows.”

A bittersweet era for England supporters, fans shared some of their best memories of the 1990 World Cup with the East Anglican Daily Times.

“I had a tough decision to make. Forego my ticket for the Rolling Stones Urban Jungle Tour at Wembley Stadium or stay at home and watch the game. I went to see the Stones and everyone brought along radios, so we were totally in touch with what was going on. Of course these days it would be possibly to watch the game on the phone and be at the gig.”

Though fans remembered the disappointment and heartbreak following the semi-final result, they were also quick to remember the highlights throughout the 1990 World Cup. A particular fond memory amongst fans was David Platt’s goal while playing against Belgium.

The timeless goal took place as extra time was heading towards a pentalty shoot-out. England got a free-kick with about a minute left to spare. Broadcaster John Motson describes the goal fondly in The Telegraph:

“Bobby Robson and the England bench were signalling frantically as to what they thought they should do with this free-kick but I don’t think Paul Gascoigne was paying any attention at all. Gazza floated his free-kick into the penalty area and David Platt, who was quite new then to international football, swivelled and volleyed it into the net.”

So, with England inching one step closer to the World Cup final once again, we can only hope this semi-final goes in our favour. Supermarkets such as Lidl and Aldi have already taken to social media to announce their employees will finish at 3:00pm should England make it the final on Sunday 15 July.

It seems this enthusiasm has filtered down to smaller workplaces. For example, AMI, a metalwork company in Sheffield has promised to offer all staff a paid day off on Monday 16 July if England really do win the World Cup.

Excitement is certainly building across the country, with nearly 20 million viewers tuning in to watch England beat Sweden in the quarter-finals last weekend.

Not sure where to watch the match? We’re showing the World Cup semi-final on our rooftop terrace at The Shankly Hotel. You can register for your spot on the roof here.