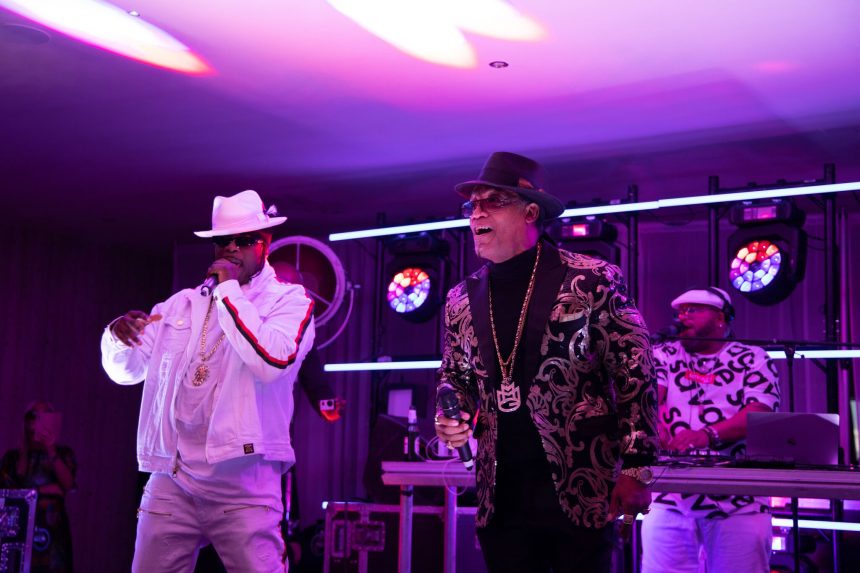 “I said a hip hop the hippie the hippie – to the hip hip hop and you don’t stop” so begins the 1979 rap sensation ‘Rappers Delight,’ as though Michael ‘Wonder Mike’ Wright is preparing us for what is about to come.

Listening to this rap group’s back catalogue makes you realise the extraordinary extent to which these 5 once ordinary men not only created hip-hop, but popularised hip-hop and brought the genre to the masses.

“As I say on stage,” exclaims the extremely dapper ‘Master Gee’ as he points to Grandmaster Mele Mel and Scorpio, “they are the architects of hip-hop and [we were] the most lucratively successful rap-group in the world.”

And so, as we chat on top of The Shankly Hotel rooftop, The Sugarhill Gang and the Furious 5 look back on their career to date, share their thoughts on Saturdays “magical” gig – and reveal who they admire in today’s hip-hop scene.

The Sugarhill Gang and the Furious Five

“We’ve known each other since the beginning,” says Master Gee before adding, “we decided that it was important to use the energy we both have and bring that voice to the world – it’s important; this had to happen.”

You know talking to Master Gee and the group that they were never going to rest on their laurels, and clearly they haven’t. Keen to be heard, Scorpio – who is wearing bright red Puma trainers and matching snapback – is quick to add, “this is what we do; some people love to travel and some people don’t – we just happen to be people who love to perform and travel.” He continues, “to keep that energy is second nature, there’s no greater feeling in the world.” 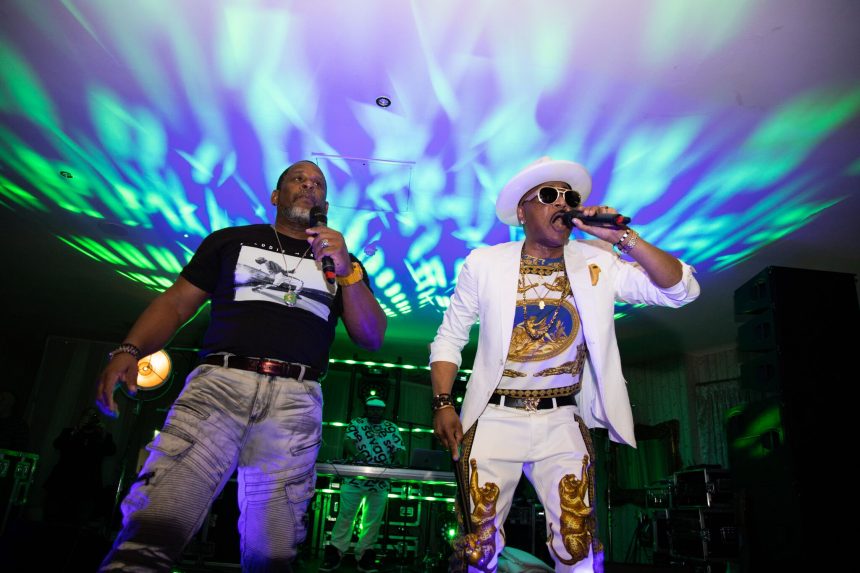 That energy that Scorpio is referring to, however, is not always a blessing as Grandmaster Mele Mel – who is rocking a cream and gold snapback and matching gold chain– points out: “Talented people get into this business and self-destruct.”

Hendogg who, despite holding a gold magnum of champagne and wearing the coolest green tracksuit we’ve ever seen, has kept relatively quiet until now: “What gets me is that everyone on the outside thinks we’ve got it easy. They say, ‘you guys have got it easy; you get on stage, perform, hangout and party every night.

“We love it, so we make it look easy,” interjects Scorpio before adding: “you’ve got to be prepared [for fame].”

As the sun begins to break through the clouds, our conversation inevitably turns towards Saturday’s gig at The Shankly Hotel and what the group thought about Liverpool and the crowd.

“The Gig was crazy,” says Hendogg; “awesome,” declares Master Gee . Hendogg, however, who wore a Liverpool scarf on Saturday, expanded some more: “It’s part of our performance to bring a part of Liverpool back to Liverpool – we pay homage to you guys.”

Master Gee – who must be a Liverpool fan – was quick to speak over him, exclaiming: “Just Liverpool though, Everton was just because we had to do that.” What’s more, ‘Rappers Delight’ – which was voted second on VH1’s 100 Greatest Hip-Hop Songs, and 251st on the index of the 500 Greatest Songs Ever – has enabled the group to “love and make good music.” 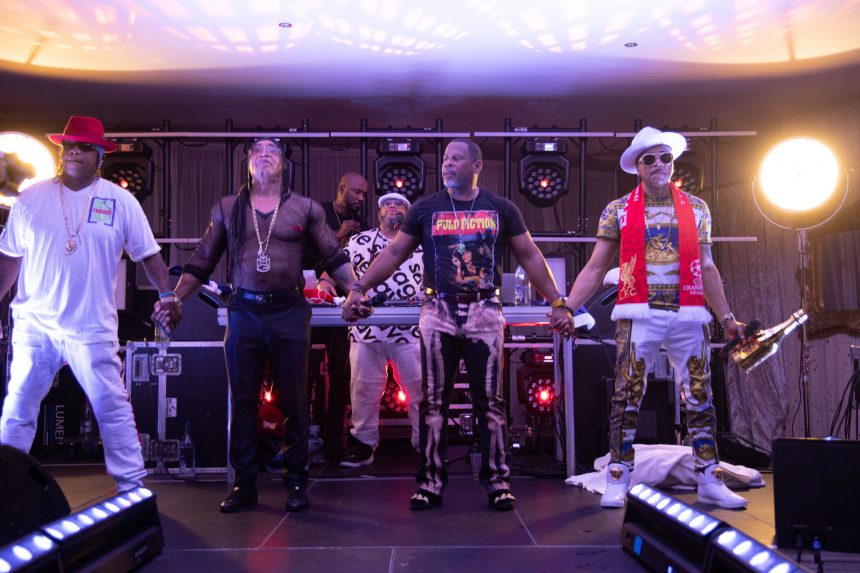 “We’re so proud of ‘Rappers Delight.’ We’re both the architects of hip-hop and an economic success,” says Master Gee, “that’s a badge of honour.”

Indeed, it’s obvious that Scorpio is aware of both his legacy and his duty as a role model: “I think you get a good judgement of our shows when you come along and you see people bringing their children and grandchildren – that’s a testament to what you’re going to hear.”

What Scorpio said next, by his own admission, was “deep” and caused him to give out a huge roar once he’d completed his sentence: “You’re placing a 6-year-old – a sponge, in front of us and allowing us to wet it – those old and new generations, they’re our bread and butter.”

As for their immediate thoughts, the hip-hop legends are big Rick Ross, Common and Drake fans, yet Stormzy and Dizze Rascal prompted their most overt and animated reaction. Unable to note who said what, Stormzy’s named was greeted by a cacophony of “whoa’s!” and “yeah’s!” before Scorpio cheered: “Shout out to our boy Dizzy.”

As our conversation drew to a close The Sugarhill Gang and the Furious 5, when asked if they had a particular career highlight, gave an answer we weren’t expecting although, being the amazing performers and perennial crowd pleasers they are, maybe we should have anticipated it: “Yeah,” said Master Gee: Being here in Liverpool.” 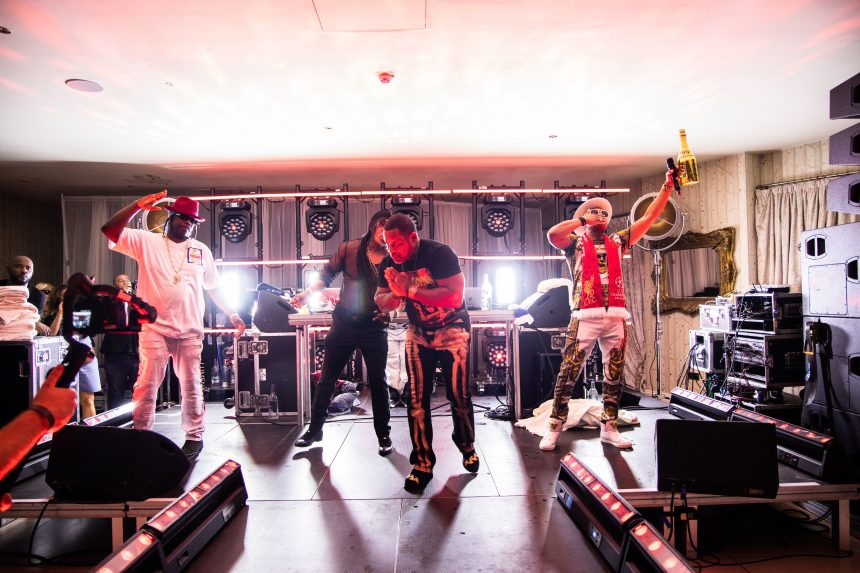 The Sugarhill Gang and the Furious Five absolutely rocked The Shankly Hotel on Saturday.

Explore the spacious rooftop or the delicious Bastion Bar and Restaurant down below as you enjoy a live music event that you’re sure to remember for a long time to come.

Head over to our Facebook page to see how Saturday’s gig unfolded and book your stay with us here. Or, you can contact our helpful team on 0151 236 0166 or email reservations@shanklyhotel.com.