From 22 to 28 August, the sounds of Paul, John, Ringo and George will be ringing through the streets of Liverpool even more than they normally do, as International Beatleweek 2018 hits the city.

And if you’re looking for somewhere to stay during annual celebrations, there’s nowhere better than The Shankly Hotel.

Catapulted to global fame during the swinging 60s, the meteoric rise of the band from Merseyside came at exactly the same time that Liverpool FC, manned by the legendary Bill Shankly, began their own whirlwind trip to the top and it’s hard not to draw comparisons between these two bastions of Scouse culture.

The Beatle – Fans of Football?

It’s well known that none of The Beatles were huge football fans – and none of them were Reds!

The are-they-aren’t-they questions over John Lennon and Paul McCartney’s sporting allegiances have been put to rest by the discovery that Paul is an Evertonian, following in his father’s footsteps. There’s even a photo of him outside Wembley during the 1968 FA Cup final. 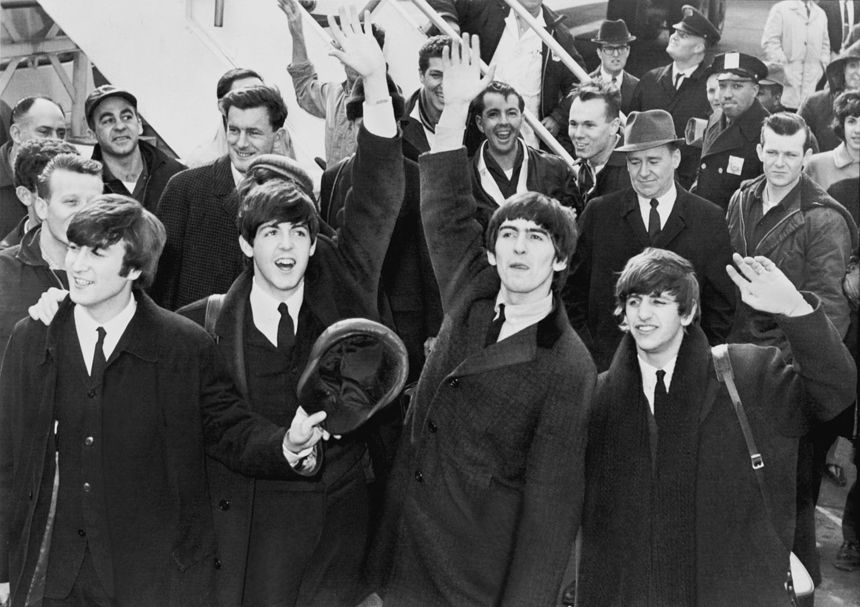 John seemed to have little to no interest in the game. George also wasn’t a footie fan.

Ringo, meanwhile, was an Arsenal supporter, following in the steps of his stepfather who hailed from London.

But that didn’t stop the boys occasionally taking an interest and at The Shankly Hotel you can experience some of the exclusive memorabilia that shows just how closely LFC’s glory days were linked to the Fab Four.

Displayed in the hotel is a telegram sent to Bill Shankly by The Beatles before the 1965 FA Cup final. In it, the Scouse band wish the Reds best of luck in their forthcoming game and tell Shankly that they’ll be watching it on ‘the tele’. 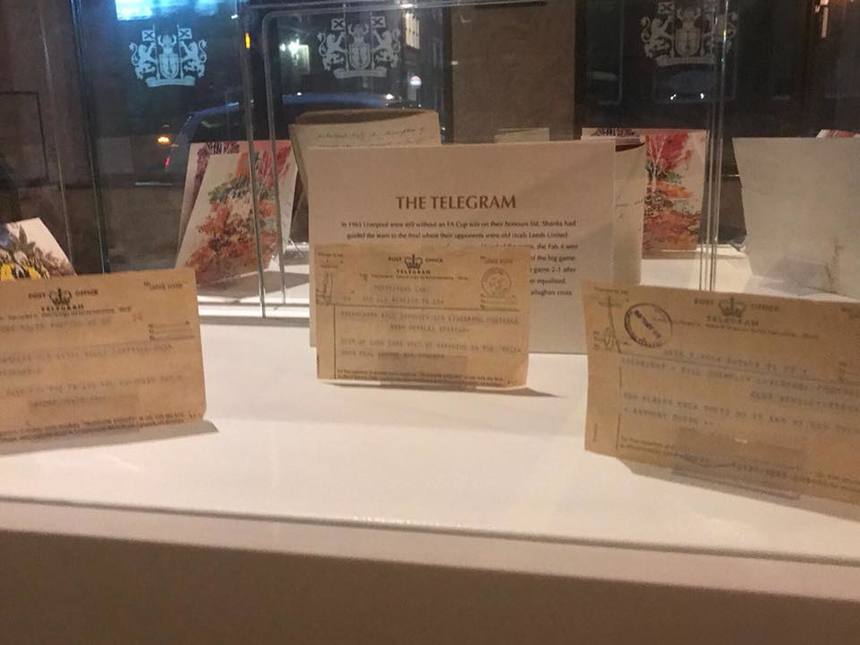 The telegram from The Beatles on display at The Shankly Hotel

Brian Epstein, the Beatles manager, even asked Shankly for tickets to the match but, in typical Shankly fashion, Bill replied:

“I have never seen any of The Beatles standing on The Kop. Any ticket I have spare will be going to my mates on the Kop.”

The lack of interest in Liverpool FC shown by The Beatles didn’t dampen LFC supporters mutual admiration for them however. Instead, Reds fans celebrated the success of four of Liverpool’s sons in their own special way…

Kop Culture and The Beatles

At the start of the 60s, Liverpool’s fans were renowned for their passion and excitement but also their songs. At each game, the Kop would come alive as the crowds roared out popular tunes and famous Anfield lyrics.

Included in that game-day track list were some of the Beatles best hits, such as ‘We Love You’. 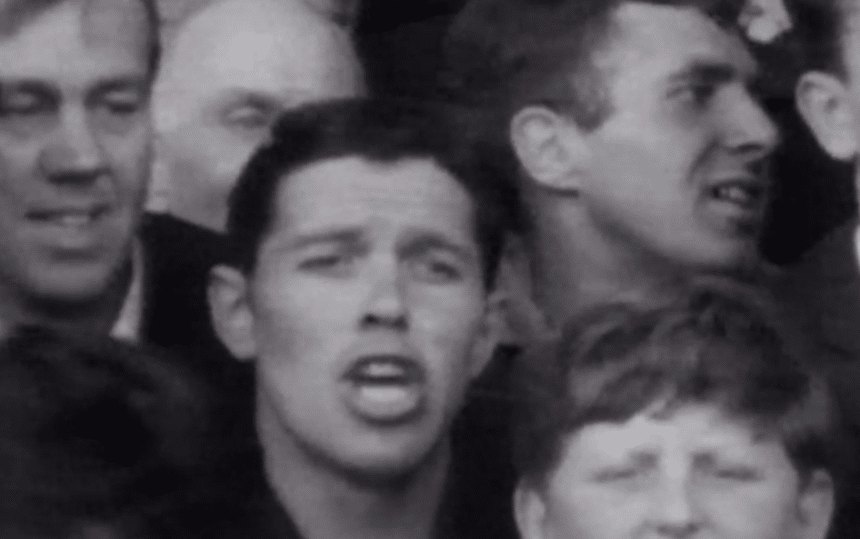 Koppites singing a Beatles song during the BBC segment on them. Source: YouTube | ReclaimTheKop

As the Merseybeats movement took off and Beatlemania started to grow from 1962 onwards, a buzz took over the city (which in the eyes of the music world had become the centre of the universe).

The Reds became renowned for singing out the hits of the band during matches. Their acclaim grew so large that they were even featured on a BBC news programme, with the journalist saying:

“It used to be thought that Welsh International Rugby crowds were the most musical and passionate in the world, but I’ve never seen anything like this Liverpool crowd… they seem, mysteriously, to be in touch with one another, with Wacker: the spirit of scouse.”

This year’s International Beatleweek kicks off with a rock’n’roll all-day session at The Cavern from 10:30am on Wednesday 22 August, with live music on three stages from global tribute bands.

The party at The Cavern continues on 23 August, before Friday sees the start of some special events for this year.

Alma de Cuba is hosting a birthday party for George Harrison and the Philharmonic celebrating the 50th anniversary of ‘The White Album’ in a special evening performance. 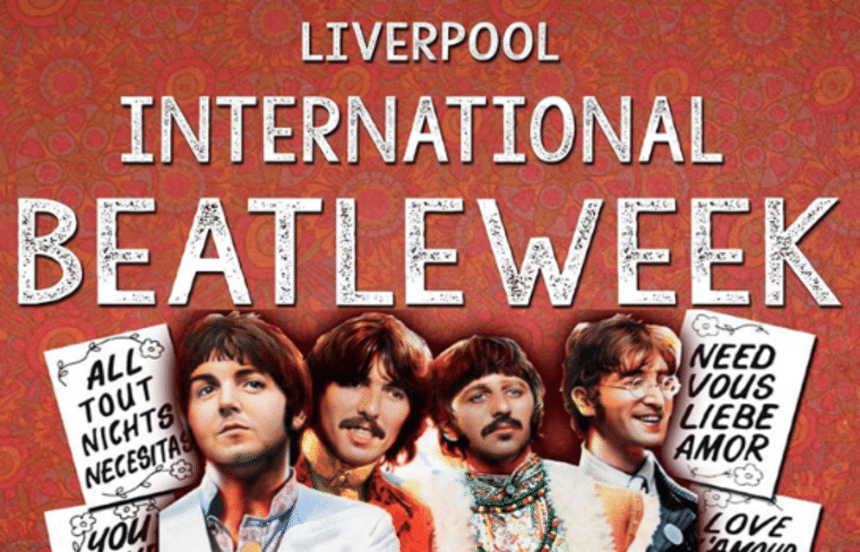 Head to the Adelphi Hotel on Friday even for the first of four late night parties filled with all the hits until the early hours. Over the bank holiday weekend, highlights include the Annual Convention and new for 2018, Scousechella at Grand Central Hall, where tribute acts will be paying homage to Paul McCartney’s 2016 Coachella performance, as well as the global superstars he played alongside: Bob Dylan, The Rolling Stones, The Who, Roger Waters and Neil Young.

For a full schedule and to buy tickets or packages, visit the International Beatleweek website. Some of the events during the week are only available for package-holders.

Staying at The Shankly

With the ultimate celebration of all things Beatles just around the corner, why not stay at The Shankly Hotel during the festival and celebrate the glory years of the city of Liverpool?

Whether you’re a Reds fan, a Beatles fan, or both, the landmark hotel in the centre of Liverpool is a celebration of the best of the city. Plus, our exclusive memorabilia includes the famous Beatles telegram sent to Bill Shankly on the eve of the 1964 FA cup final! 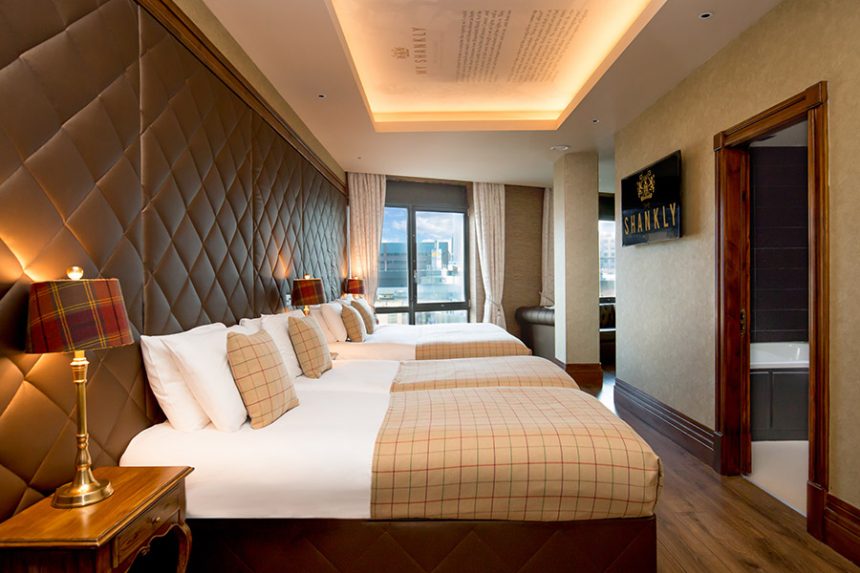 A stay at the Shankly is an experience like no other with suites that commemorate the legacy of the legendary manager and a bar and restaurant dedicated to the beautiful game.

Situated in the centre of the city, you’ll only be a short walk away from the key venues of International Beatleweek including the Adelphi Hotel (9mins) and the Cavern Club (5mins) as well as nearby to all the best Beatles attractions around Liverpool.