Strap on your Lederhosen, grab your steins and get ready for an Oom-pah-ing good time at Liverpool Oktoberfest 2017. Taking over Pier Head this giant German festival has become a favourite among Liverpool residents and visitors alike and will be hosted this weekend from 21st – 24th September.

Let’s take a look at what you can expect from Liverpool Oktoberfest 2017. 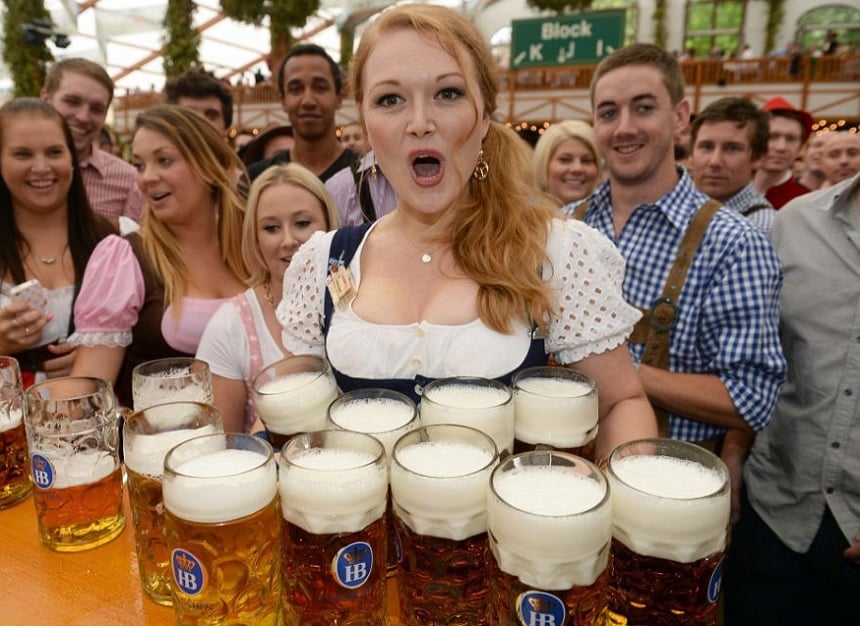 Fans of a perfectly brewed golden ale will understand the joy of picking up a chilled glass of German beer. Especially when it comes in huge stein glasses that can hold two pints of the stuff.

This year your pennies will stretch further too as organisers are selling these giant bevvies for just £8.

Unlikely to run short Oktoberfest will be supplied by a tanker holding 23,000 litres of specially brewed beer brought in from a 200-year-old Bavarian brewery.

Traditional Bavarian attire will be worn by all staff at Liverpool Oktoberfest, ladies in their dirndl and guys getting their pins out in Lederhosen.

These delightful garments have been around for centuries inspired by the traditional garb of peasants who lived and still live in the Alps. 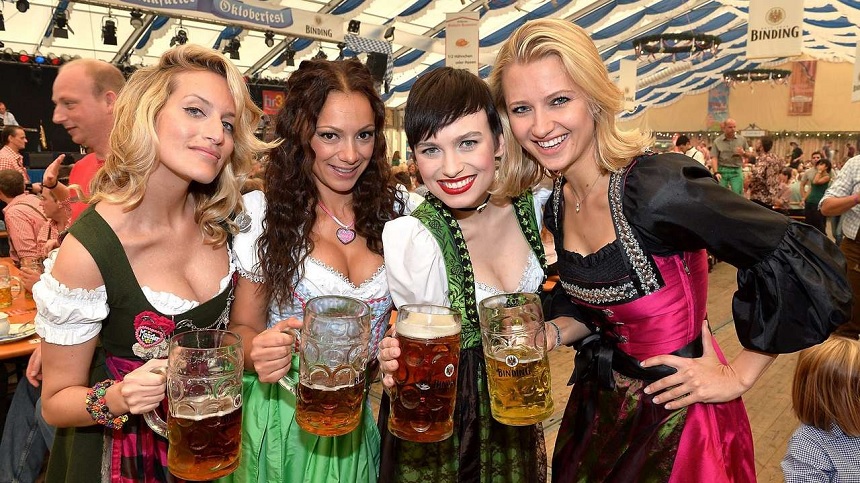 In the1870’s the dirndl became the height of fashion among ladies of the upper classes in Austria and by 1890 the popularity of the garment had spread to the rest of the country.

A properly tailored dirndl can set you back a couple of hundred euros, made from custom printed fabrics and made to measure.

The dirndls of today are still worn on formal or special occasions by Austrian and Bavarian ladies. The less traditional outfits, whilst styled similar to the dirndl are reserved for festivals or costumes in themed bars and restaurants around the world. 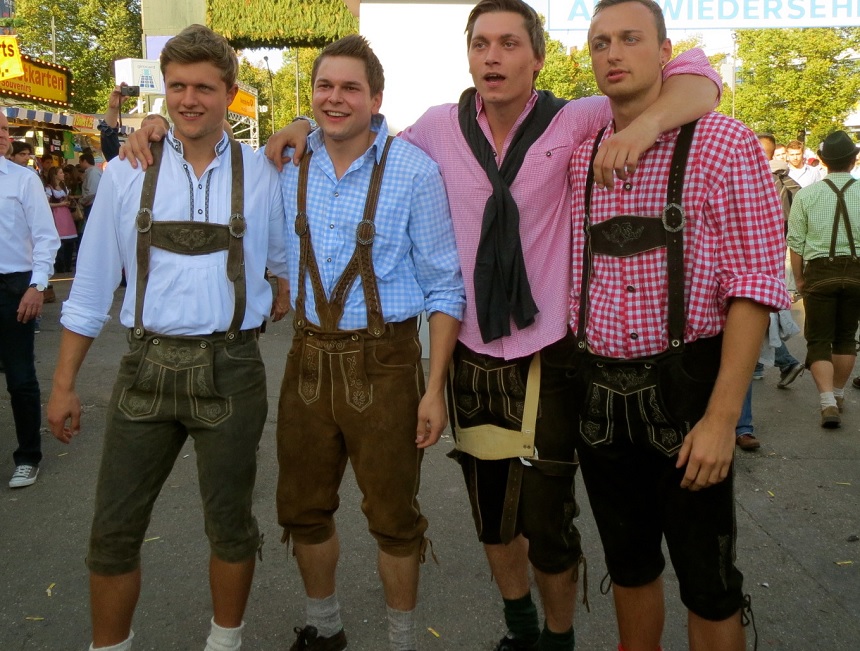 Translated literally as “leather breeches” Lederhosen are derived from the working-class uniform of Bavaria.

The tough wearing material of Lederhosen was perfect for men who daily undertook physical labour in their job roles.

Instead of catapulting to the height of fashion at the end of the 17th-century Lederhosen popularity declined as it was regarded as clothing for “uncultured peasants” rather than fashionable attire for the upper classes.

The classic Lederhosen and techniques for tailoring them are now preserved as a heritage Bavarian garment and are regarded as a symbol of Bavarian pride or male virility. Many regional men still chose to wear Lederhosen to carry out taxing outdoor chores or to attend local festivals or pubs.

At Oktoberfest, both dirndl and Lederhosen will be making an appearance in traditional and more modern forms. Get into the spirit and check out the latest modern Bavarian fashion here for inspiration.

All this beer will need soaking up with some tasty food and luckily Oktoberfest will be bringing more than mass quantities of German alcohol down to Pier Head.

Immerse yourself in the Bavarian culture completely by dining on dishes such as Bratwurst, Brezel, Schnitzel and Schweinebarten. All perfect dishes to accompany a pint or tow of Bavarian beer made mainly of pork and pastry.

Better still there are fabulous offers for both beer and food available including Bavarian sausage, fries and a ½ pint of Feistber, just to get you started.

Through the weekend there will be a live DJ playing some traditional and popular German tunes and of course what Oktoberfest would be complete without an Oom-pah band.

Prepare yourself by brushing up on your German music knowledge with a few favourite tracks;

You and your friends are guaranteed an experience of German heritage and culture as well as a full stomach and a taste for finely brewed German beer at this year’s Liverpool Oktoberfest.

Don’t forget to grab yourself a souvenir stein glass and head on down to Pier Head this weekend. 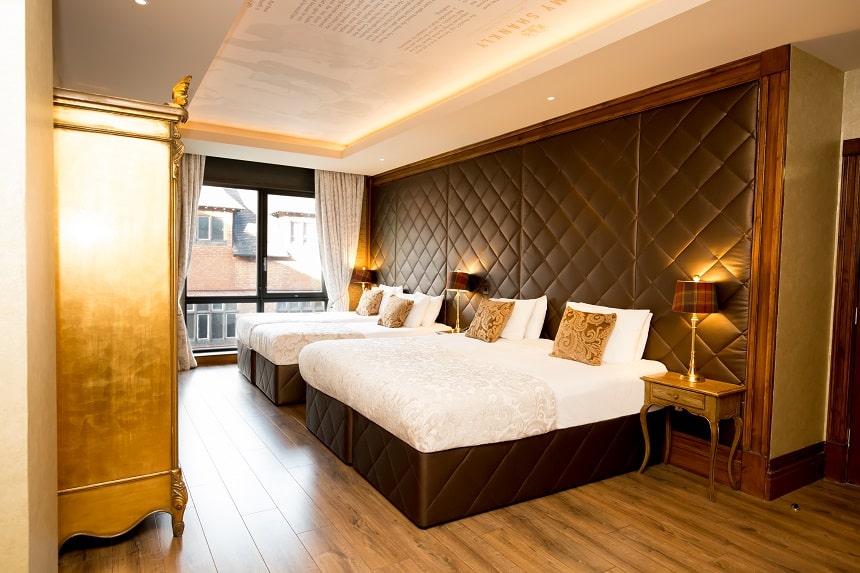 Moments away from Oktoberfest fun The Shankly Hotel is the ideal place to rest your tired feet after a day dancing to Oom-pah tunes.

What’s more, the Bastion Bar and Restaurant has a welcoming atmosphere for winding down after Oktoberfest fun and will serve you a hearty breakfast the following day to help you recover.

The Shankly Hotel is Liverpool’s only football-themed hotel in the heart of the city. Themed around Liverpool’s favourite football player/manager, Bill Shankly, guests can enjoy a one of a kind hotel experience including a trip into the career and life of the great man himself.

For more information about the Shankly Hotel or to book your stay for Oktoberfest Liverpool call 0151 459 3383 or email reservations@shanklyhotel.com.