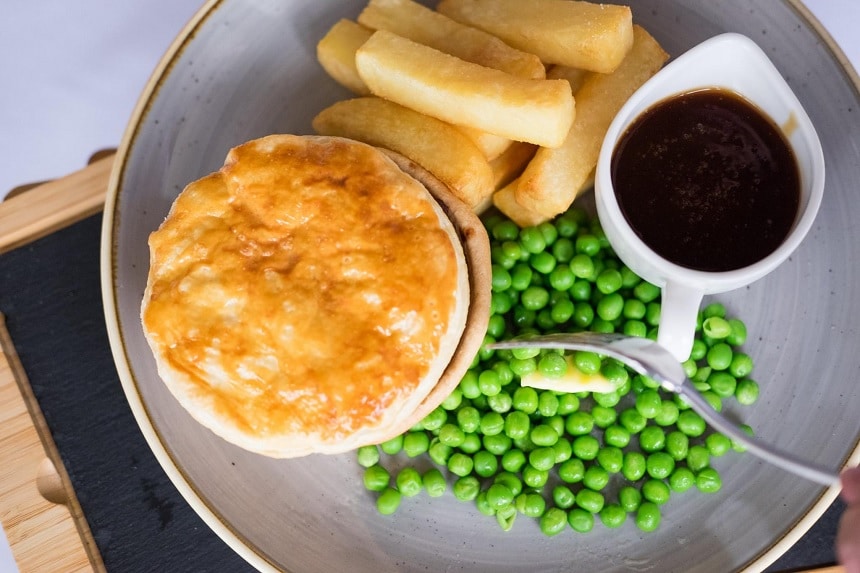 There aren’t many sports that have their own savoury staple. Perhaps it’s no surprise that the oldest, most celebrated sport in the country has adopted one of the world’s oldest snacks as its emblematic meal: the humble pie epitomises a world immersed by oversea owners and social media.

So, with National Pie Week on the horizon, we’ve decided to take a closer look at why, when you’re at the match, you always choose that meat and potato treat.

A Match Made in Pastry Heaven

The humble pie has popped up on numerous occasions at some of the most important matches. From 20 stone men to the Sunderland forward who, when a pie was thrown at him from the stands picked it up and devoured it, the pie is a Saturday staple.

So eminent is the connection that in 2008 a man vowed to tour the UK in search of the best savoury snack. He ate a mammoth 92 pies and even penned a book about his experiences named, wait for it, “92 Pies.”

It seems somewhat proper to rate the pies and so, that’s where the team at Pierate come to the fore. Because of them, we now know that Morecambe is the home of the nation’s most loved pie.

Everton’s attempt at a pie, however, was described as: “Goodison, but not good enough.”

But, to our horror and distaste, Liverpool are nowhere to be seen. The cheek of it.

Founded in 2010, Homebaked is a co-operative bakery situated in the shadow of Liverpool’s stadium. Some even say that the current eatery that provides supporters with their pre-match pie was inspired by the kindness of Shankly himself.

This delicious bakery has provided the community and countless supporters from across the world with pies and snacks for almost a century, and, is the ideal place to celebrate National Pie Week.

Since 2010, the cues at Homebaked have snaked out the door and around the street as it has become traditional to purchase a pie to either keep your hands warm or, more importantly, support the local community.

Many believe that Homebaked was inspired by Liverpool’s iconic leader and that could be why their trademark pie is aptly named: “The Shankly Pie” made with steak, bacon, mushroom and onion.

Today, Homebaked use their massive matchday profits to help educate and train their bakers. They also hold classes and communal courses and any surplus food is donated to food banks and homeless shelters.

So, why not pop in and support them this National Pie Week.

So, to celebrate National Pie Week, The Bastion Bar and Restaurant at The Shankly Hotel – which has recently been nominated for Hotel of the Year at the LEP Liverpool Tourism Awards – has created a delicious pie to mark the event.

From chicken and onion to Shankly’s favourite steak and kidney, The Bastion Bar and Restaurant is the place to be this March.

Our pies are made entirely from scratch and baked fresh each day to ensure maximum flavour and maximum enjoyment.

Indeed, why not make the most of National Pie Week and book a stay at the hotel. The Shankly is ideal for romantic stays or weekends away – and what could be more romantic than a pie dinner for two.

Our friendly and helpful team can’t wait to hear from you. Contact us on 0151 236 0166 or email reservations@shanklyhotel.com

Also, keep on top of the action over on our Facebook as we’re set to star in our very own BBC documentary.