The Kop Magazine is one of the most popular football magazines in the country, providing fans with LFC insights for over 20 years. After 243 editions, The Kop Magazine published their final edition, and we here at The Shankly Hotel are honoured to be featured in the last publication.

If that wasn’t enough, we are thrilled to announce The Kop Magazine has presented us with a fantastic donation to The Shankly Museum. Back in September 2013, the magazine produced a giant birthday card in honour of Bill Shankly’s 100th birthday, which went on display at the Shankly 100 Exhibition in the Capital Building, Old Hall Street, Liverpool. LFC fans and stars signed the card, including Jamie Carragher. After nearly two years of gathering dust in The Kop Magazine storeroom, they proudly donated the card to The Shankly Museum for football fans to enjoy for many years to come. 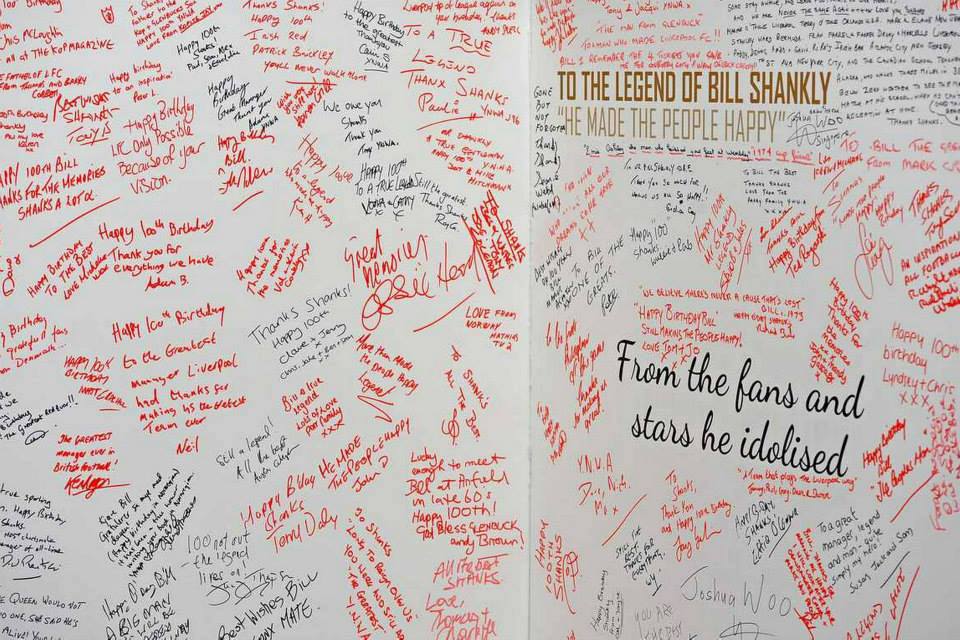 The Kop Magazine also donated numerous other LFC memorabilia, including a signed John Aldridge photograph and a pile of Kop Challenge entries.

Bill Shankly’s grandson, Chris Carline, recently commented: “I’m made up to receive the giant card that The Kop Magazine recreated and got fans to signs to mark my granddad’s 100th birthday. The response around that anniversary reminded the family of the influence of the man. Even so far on after he passed away, his legacy is still as strong as ever and that was one of the reasons for the hotel.

“The family wants to keep his legacy alive and even when I go to the match now, young lads come up to me and say ‘I love yer granddad, he’s a God’ when they weren’t even born until after he died.”

Other items include the key to The Shankly Gates and the legendary manager’s This Is Your Life book, plus many more. The items will be displayed in The Shankly Museum and will be free of charge to the public.

Chris added: “A big thing for me was getting the ethos of the hotel right. My granddad was a man of the people, he had a socialist persona, so it would never have felt right to me to charge people who are not staying here to see the museum.

“If anyone wants to come in off the street and wander around that’s fine. If you want to come in and have a bite to eat and a drink while viewing then it’s entirely up to you. It’ll be open to everyone because it should be.”