Bill Shankly was a self-proclaimed man of the people. He loved the fans as much as the game of football itself, and he was never shy to tell them just how much they meant to him.

He was a wonderful manager for so many reasons, but most of all because he cared about the people who made the club, and that was the fans. Shankly himself once said: “At a football club, there’s a holy trinity – the players, the manager and the supporters”.

Shankly proved just how much one fan’s words meant to him, when he penned a letter to a 13-year-old boy, Chris Rafferty, whom he met when standing on The Kop. 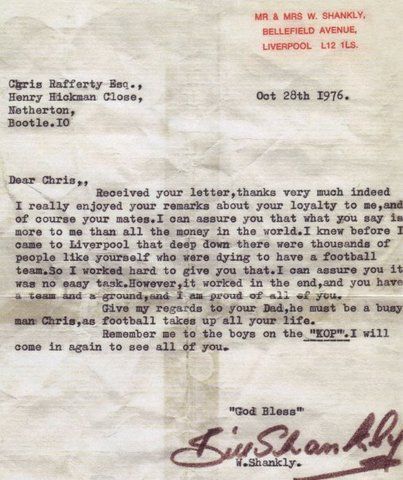 Received your letter, thanks very much indeed. I really enjoyed your remarks about your loyalty to see me, and of course your mates. I can assure you that what you say to me means more than all the money in the world. I knew before I came to Liverpool that deep down there were thousands of people like yourself who were dying to have a football team. So I worked hard to give you that. I can assure you it was no easy task. However, it worked in the end, and you have a team and a ground, and I am proud of all of you.

Give my regards to your Dad, he must be a busy man Chris, as football takes up all your life.

Remember me to the boys on the “Kop”. I will come in again to see all of you.

The letter was written in 1976, two years after Shankly retired as manager of Liverpool Football Club, and his influence on his fans was, and still is, as strong as ever.