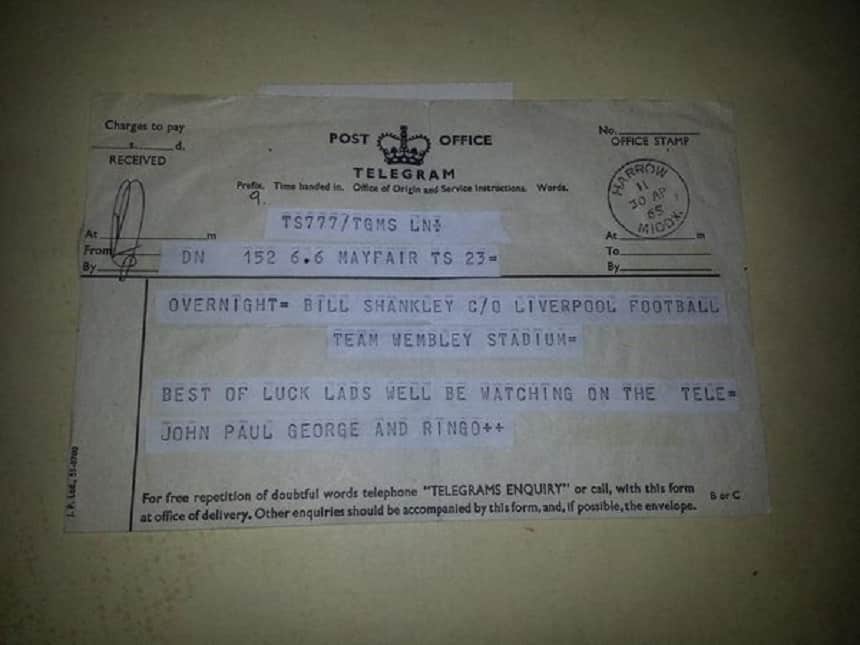 In Liverpool, music and football go hand in hand thanks to the rise in both Merseybeat and the quality of Merseyside football in the 1950’s. After Bill Shankly accepted the manager’s role at Liverpool football club there was a dramatic turnaround in performance and of course, Beatlemania began to traverse the globe as the boys made headlines with their unique sound.

The Shankly Museum holds vast archives of rare Shankly memorabilia but none showcase the link between Liverpool music and football so much as the telegram that will be unveiled to mark the two-year anniversary of The Sahnkllky Hotel opening. Shanks received the telegram from the Fab Four on the day of the 1965 FA Cup Final when Liverpool played Leeds and won.

This remarkable piece of footballing and music memorabilia marks an upturn in the pop and Kop culture of Liverpool. These two fascinating phenomena took audiences across the world by storm creating a combined passion for Liverpool football and Merseybeat music.

Shankly was loved by Liverpool, not just for what he did to transform the city’s beloved team but also for his quick wit and sharp humour. Scousers are known for being direct, straight talking people with hearts of gold and that’s just what Shankly was like.

Above all Shankly was a down to earth man who knew the magnitude of the task he had ahead of him when he walked through the main entrance at Anfield in December 1959.

It wasn’t long before his work was rewarded as Liverpool football club climbed the ranks sweeping into division one by April 1962.

The turn around delighted fans who could be heard singing their hearts out from the Kop urging their players onward and upwards.

Fathers would drop their boys into the “boy’s pen” and go stand with their mates bellowing out tune after tune from the charts, which at the time was filled with tracks from local Merseybeat bands.

“The fans here are the greatest in the land. They know the game and they know what they want to see. The People on the Kop make you feel great – yet humble.”

The rise in the quality of Liverpool football, thanks to Shanks’, mirrored another sweeping craze of the sixties; Beatlemania.

Four boys from the city were taking the music world by storm producing track after track, each hitting the UK top ten and holding their positions for weeks on end.

Of course, the people of Liverpool were jubilant at this point as two of their homegrown talents were sweeping the world and coming up trumps.

Liverpool Football club even played the top ten at Anfield matches through the PA system before the game as almost every song belonged to a Merseybeat band. This also became known as the earliest instance of pre-match entertainment.

Gerry and the Pacemakers, Cilla Black and The Beatles had arrived on the music scene as had Liverpool football club in the international world of football.

The synchronicity of the two occurrences stirred something inside the people of Liverpool creating the amazing mix of music loving football fans we have today.

The Beatles and Shankly

The Beatles are known for having no particular ties to either of the Merseyside football clubs and quite famously when Brian Epstein asked for tickets for the 1965 FA Cup final for the boys Shanks replied;

“I have never seen any of The Beatles standing on the Kop, any tickets I have spare will be going to my mates on the Kop.”

Never the less The Beatles sent support to their home team on the day of the 1965 FA Cup final against Leeds, the clubs greatest moment to date and a testament to Shankly, the man who put them there.

The FabFour sent a telegram wishing the team and Shanks the best of luck and letting them know they’d be watching on TV.

Liverpool went on to play a gruelling match against Leeds, who also gave it their all, and the FA Cup final of 1965 went into extra time with no goals scored.

The first goal of extra time was scored in a matter of minutes putting Liverpool up by one, then Leed’s equalised seven minutes later making it neck and neck. The final goal was scored in the 117th minute by Liverpool winning the game and giving Liverpool their first-ever FA Cup triumph.

Could the Beatles telegram have given them the extra push to perform or was it just the brilliance of Shankly and the player’s reluctance to disappoint him and their fans?

All we know is that The Beatles telegram to Shanks now serves as a reminder of one of Liverpool’s finest footballing moments and Shankly’s “greatest day”.

Come along and learn more about the man and legend Bill Shankly, take a guided tour of the museum and be recounted with heartwarming stories about the great man from those who knew him best, his family.

Take a Shankly Experience tour around Liverpool, discovering important sites of local history and heritage as well as seeing the hallowed grounds of Anfield or Goodison.

You can even stay the night with amazing accommodation offers that can include, overnight stays, breakfast or evening meals in luxury Shankly themed hotel rooms.

After two wonderful years have passed since we opened our doors to the public The Shankly Hotel has helped make some amazing memories for our guests, our staff and the city of Liverpool. We look forward to what the future holds at The Shankly Hotel.

Call on 0151 459 3383 or email reservations@shanklyhotel.com and book your stay at The Shankly Hotel, Liverpool’s only football-themed city centre hotel.